Sleep On It have announced a 2020 headline tour today. Dates kick off Friday, February 28 in Toronto, ON and will finish in the band’s hometown of Chicago, IL at Beat Kitchen on Saturday, March 28. VIP packages are on sale now. They include an intimate three-song acoustic performance, meet and greet and professionally shot photo with the band, signed poster, laminate and more. Fans can grab VIP tickets and check out packages at www.sleeponitband.soundrink.com
General tickets will go on sale Friday, January 10 at noon EST. Support for the tour will also be announced on this day.
The band’s newest album ‘Pride & Disaster’ is out now through Equal Vision Records. Fans can check out the
music videos for the singles “Under The Moment“, “Hold Your Breath” and “After Tonight“. The band and album were highlighted as one of Billboard’s emerging artists of 2019.
Sleep On It is comprised of Zech Pluister (vocals), TJ Horansky (guitar/vocals), Jake Marquis (guitar/vocals), and Luka Fischman (drums). 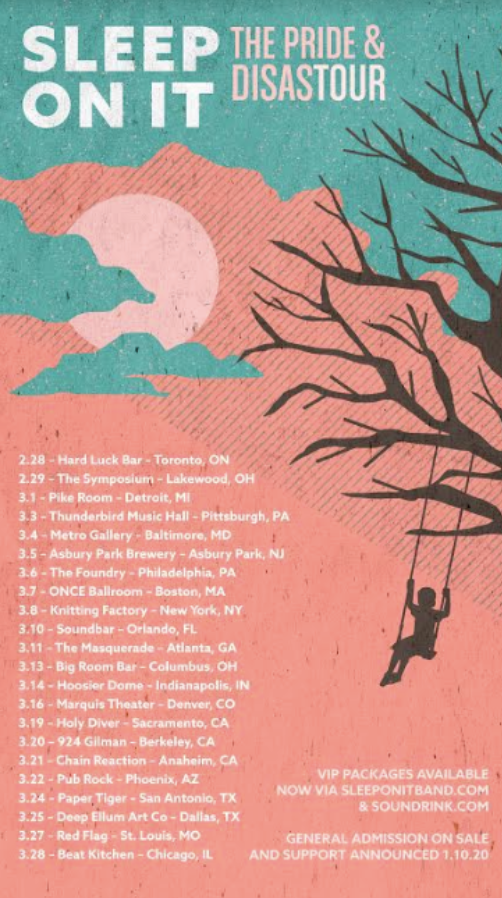 WOW.. Slow down! Who's Idea was it that we had to

Get Your Gaming On

GET YOUR FAN GEAR HERE

Bad Things Happen To Good People! We are there to help

Do You Need Surfshark

Leave Your Shopping To Shipt

FIGHTING TICKETS ON A PERSONAL LEVEL!